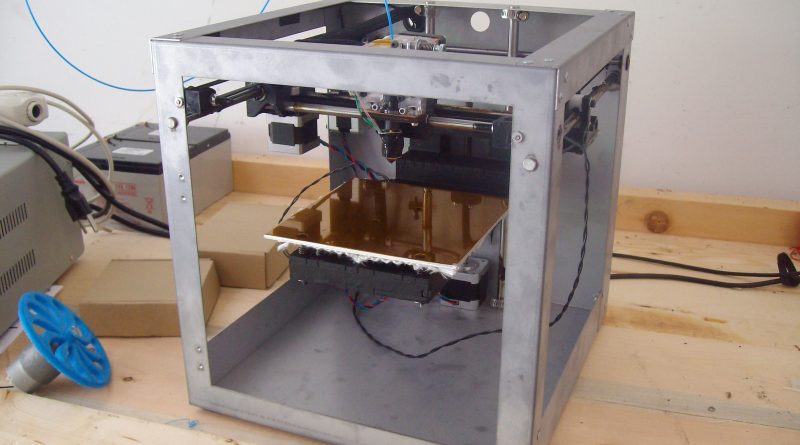 We’re had a Solidoodle v2 3d printer for over 3 weeks now and I just wanted to write about its strengths and weaknesses.  In preparation for the Mini-Maker’s faire in Atlanta we had to print out 15 of our simple line following robot plans, so we really put the Solidoodle through its paces.  Each simple line following robot kit consisted of 5.5 hours of printed parts, so it took awhile! Overall the Solidoodle is well constructed and it arrived in a large box with lots of bubble wrap.  We have found one small issue with the z-axis homing switch.  First off, if you’re not familiar with 3D printers, particularly DIY 3D printers, the printer homes each axis prior to each print.  The homing of the z-axis is critical, because it sets the distance between the nozzle and build platform.  This distance kind of smears the first layer down, so it sticks to the build platform.  If you have this distance too big, the parts won’t stick and the second layers will pull up the first layer and you’ll definitely not get a good print.  If the distance is too small, the nozzle will collide with the build platform and perhaps tear up your kapton tape.  The solidoodle build platform is constructed of aluminum with kapton tape on top.  The kapton tape also helps adhere the first layer, since its a high temperature polyimide film.  I noticed during printing all those simple line following parts, that z-axis homing distance was getting smaller and smaller.  At the time, the solidoodle was very new to me and I didn’t think much of it, the prints were coming out fine, just the raft was getting thinner and thinner. Raft is a 3d printing term for the support lattice.   The raft or support lattice is also there to help adhere the first layer of the part.  OK, back to my story, the rat was getting thinner and thinner, but why?  Upon inspection it appeared the z-axis homing switch positioning screw was moving.