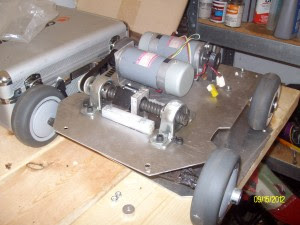 We really wanted a RepRap, but we just don’t have the time to build one from scratch and fully built models are usually well over $1000.  So far the solid doodle is a great 3D printer, especially for the price of only $499.  Here’s our first print,  a wheel for our upcoming version 2 of our simple line following robot: And here’s the solid model of our upcoming version 2 simple line following robot: The new simple line following robot uses a arduino nano micro-controller and the same dual axis h-bridge driver as the first version.   We replaced the swiveling wheel with a simple peg that will now drag instead of rotate and the sensor bar array as been updated as well, to be more simple to assemble.  We’re going to feature this new bot at the upcoming mini-makers faire at Georgia Tech next month, so stay tuned.

Also in the works is a more advanced robot codenamed Mitchel.  Here’s a sneak preview of the advanced edger bot’s drive train: Mitchel the edger robot’s drive train uses two Hitachi DC servo motors with encoder feedback.  One servo motor drives the rear wheels with two timing belt pulleys and the steering is controller through a ball screw assembly.  The robot will ultimately have a machine vision camera to follow the lawn edge and a motorized edger head to perform the actual edging function.  We hope to roll out this robot sometime in the upcoming months.