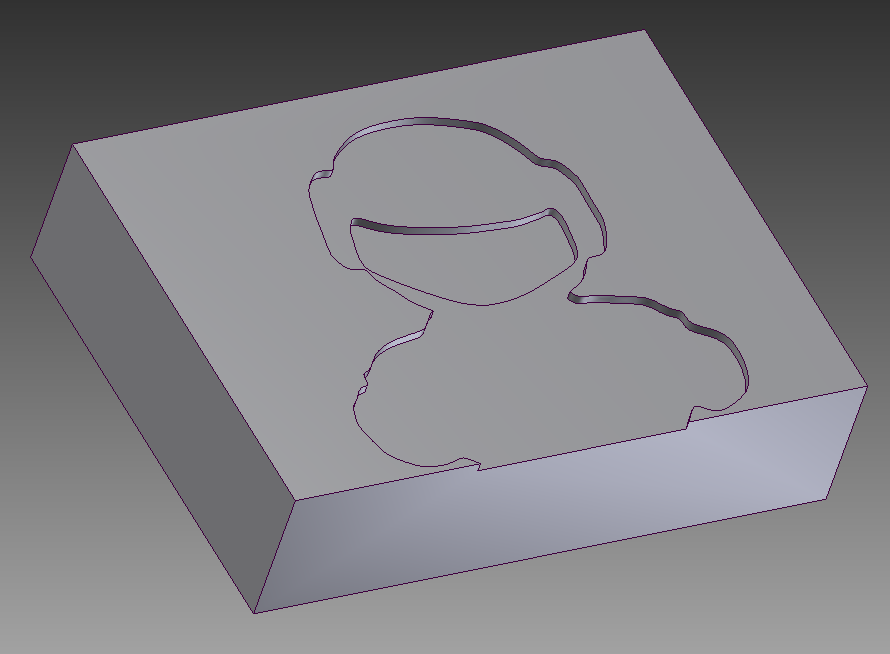 Setting up the mini-mill went fairly smoothly but it took awhile to get the all the settings in EMC2 correct.  For our first CNC part, I took the hometomakearobot.us logo and extruded it onto a block to create the 3D solid model shown to the left.  I figured this part would be a good one to test our milling capabilities.  Even though the part doesn’t provide any function, it’s complex enough to require a working cnc mill.

I tried numerous CAM (computer aided manufacturing) programs without success.  My brother finally stumbled upon a program called EstlCAM 3D at download.com.  The CAM program is in German, but the version you download from download.com is in mostly english. EstlCAM is very easy to use and creates clean G-Code. It’s shareware and only mills 80% of the part until registered but the registration is only $22 dollars!

Here’s the g-code that EstlCAM provided for the above solid model:

Since EstlCAM only works in metric units and I work in english units, we had to run the g-code thru a program that converts it called “NC code scaler”.  We also had to manually modify the feed rates, but you could adjust them accordingly in EstlCAM beforehand.  Here’s our first CNC machined part: As you can see the engraving didn’t produce the robot visor details.  This is due to the fact the end mill we used was too large to get into those details and EstlCAM knew this fact and didn’t put in the g-code to produce it.  There is a lot of information to know in order to machine good parts, that’s where a 3D printer would have been easier.  However, 3d subtractive milling is still the best way to make robot parts and you can work in metal too.  Future work includes understanding feed rates, depth of cuts, engraving versus milling, the list goes on and on, but we’ve demonstrated for the moment that future robot building will be much easier and a hell of a lot more precise too!